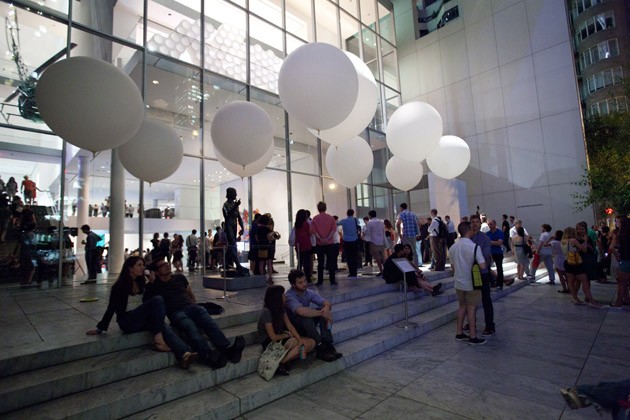 A single Ruler stands at the center of a life-sized gameboard. Can the other players work with and against each other to usurp the Ruler? Starry Heavens is a social and strategic game for 10 or more players that was created for an event at the Museum of Modern Art in New York City in 2011. During this workshop, we will be playing the game and trying out new rules, using input from players. Sign up for the playtest to experience the game design process first-hand.

Eric Zimmerman is a game designer, entrepreneur, author, and academic who has been working in the game industry for 15 years. Eric’s diverse activities have made him one of the New York Observer’s “Power Punks,” one of Interview Magazine’s “30 To Watch,” one of International Design Magazine’s “ID 40” influential designers and one of The Hollywood Reporter’s “Digital 50” along with Stephen Spielberg and Will Wright. Eric recently was honored with a “VIP Award” by the International Game Developers Association for his years of work in the game creation community. For nine years, Eric was the Co-Founder and Chief Design Officer ofGamelab, a game development company based in New York City that was named one of 5 “Rising Star” design firms by HOW Magazine. Eric lectures and publishes extensively on games, including keynotes at major industry events. He is the co-author with Katie Salen of Rules of Play: Game Design Fundamentals, the definitive textbook on game design. He is also the co-editor with Katie Salen of The Game Design Reader and co-editor with Amy Scholder of RE:PLAY – Game Design and Game Culture.

Nathalie Pozzi is an architect whose projects cross the boundaries of art installation, architecture, and landscape. Trained in Venice, Stockholm and Helsinki, Pozzi exploresthe classical design of space and light and the elegant use of materials, while also incorporating social and ethnographic elements into her work. Her projects expand thepossibilities of architecture from building beautiful structures into a global and cultural act. Projects range from the short film “Home”, presented at the 4th International Festival for Architecture in Video in Florence, to design and production consulting for internationally renowned artists. Recent work with game designer Eric Zimmerman involves the creation of large-scale physical games, including Starry Heavens, exhibited at the Museum of Modern Art in New York City in 2011.